You are here: Home / Links of Interest / Health Care Policy and Reform / The High Cost of End-of-Life Healthcare – Myth?

There has been a lot of talk and presentation on End of Life care and its high costs. “The Myth Regarding the High Cost of End of Life Care” reviews those costs and expands the topic beyond End of Life to all the population with chronic conditions and functional limitations. 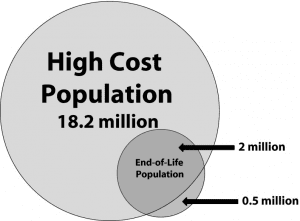 – Individuals who have high health care costs because it is their last year of life (population at the end of life),

– Individuals who experience a significant health event during a given year but who return to stable health (population with a discrete high-cost event), and

– Individuals who persistently generate high annual health care costs owing to chronic conditions, functional limitations, or other conditions. These individuals are not in the last year of life and live for several years generating high health care expenses (population with persistent high costs).

Our newsletter provides a quick overview of what we are working on, latest news in elder care, and much more!

Hurricane Maria devastated Puerto Rico on September 20th and the residents of the island remain in great need of assistance.  Many months later the elderly receiving long term care assistance or in need of such care are among the most vulnerable in the wake of the disaster. Over 16% of Puerto Rico's population are elderly, 40% of them live at or below the poverty level. A high percentage compared

An ever-growing source of news in care

A comprehensive section on the work we produce